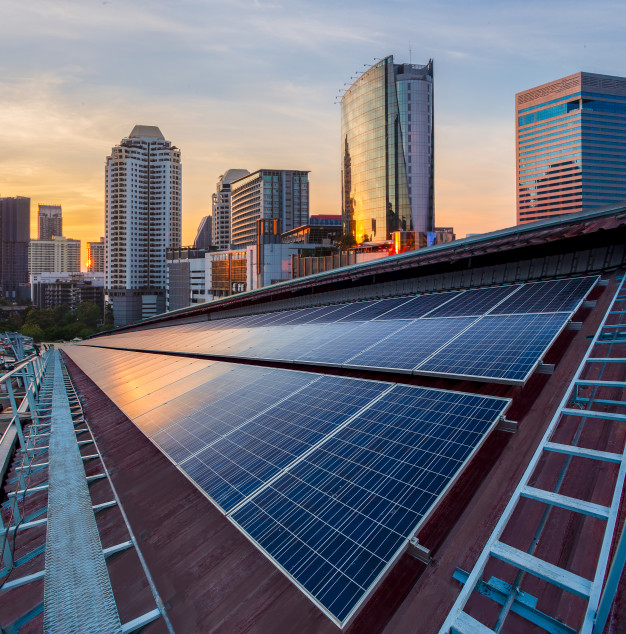 Solar batteries have the objective of accumulating the electrical energy generated by photovoltaic solar panels to be able to use it at night or on cloudy days. What are solar batteries?

The use of batteries also makes it possible to provide a higher current intensity than what a photovoltaic panel can offer in operation. This would be the case if several electrical appliances were used at the same time.

A battery consists of small 2V electric accumulators integrated in the same element. The batteries supply direct current at 6, 12, 24 or 48V. The accumulator is the cell that stores energy through an electrochemical process.

For example, when we talk about a 12V battery, we mean a series of 6 lead-acid cells of 2 volts each. Monoblock batteries are batteries composed of several 2V cells forming a single block.

Stationary batteries, also known as solar accumulators, are batteries composed of 2-volt elements connected in series until reaching the desired working voltage for the solar installation.

Here at West Wire Solar, our solar power packages include all the products required in the installation of a superior solar power system that will withstand even the most intense sunlight received.

How do solar batteries work?

The batteries have the function of supplying electrical energy in the system at the moment when the photovoltaic panels do not generate the necessary electricity. For example at night or in times of low light.

At the moment when the photovoltaic panels can generate more electricity than that demanded by the electrical system, all the energy demanded is supplied by the panels and the excess is used to charge the batteries.

Batteries transform the electrical energy it receives from photovoltaic modules into chemical energy. This conversion is carried out from the reaction that occurs when two different materials, such as those of the positive and negative plates, are immersed in the electrolyte. The electrolyte is a solution of sulfuric acid and water.

Electricity flows from the battery as soon as there is a circuit connected between the positive and negative poles.

As the battery discharges, the composition of the lead in the plates is more similar. At this time, the density of the acid decreases and the voltage between terminals decreases.

The ability to undergo a constant charging and discharging process is known as a battery’s resistance to cycling.

There are two types of batteries according to their cycle:

Low cycle batteries are designed to supply an amount of current for a short period of time and withstand small surges without losing electrolytes, as in the case of automobiles.

However, these batteries do not withstand deep discharge. If they are repeatedly discharged below 20%, their useful life is shortened considerably. Therefore, these batteries are not a good choice for solar photovoltaic systems.

They are designed to be repeatedly discharged up to 80% of their capacity. This feature makes them the best option for solar energy systems.

Characteristics to consider of a solar battery

Most important characteristics when choosing a battery or a solar kit:

What is the lifespan of a solar battery?

The useful life of a battery for solar installations is usually around 10 years. However, if frequent deep discharges (> 50%) are made, their useful life plummets. Therefore, it is advisable to install enough capacity so that 50% of the discharge is not exceeded.

Batteries are classified according to the type of manufacturing technology as well as the electrolytes used.

The most commonly used batteries in solar installations are lead-acid, due to the price ratio for available energy. Its efficiency is between 85-95%, while Ni-Cad is 65%.

Surely the best batteries would be lithium (mobile) batteries. However, the lithium battery is not economically viable for this application.

All lead acid batteries fail prematurely when they are not fully recharged after each cycle.

If a lead acid battery is left discharged (for days) at any time, it will cause a permanent loss of capacity.

They are the most used. There are two types of liquid batteries:

Open, with lids that allow the water to change.

In a sealed way, they are closed but with valves that allow possible gases to escape during excessive loads.

In the case of gel batteries, the electrolyte has turned into a gel. In the case of the AGM battery (Absortion Glass Mat) it has been separated by a fiberglass, with great absorption power, which acts like a sponge.

Both gel batteries and AGM batteries are maintenance free. They will never need to add water.

Solar batteries store energy. They store the electricity generated by solar panels at times of low demand and supply it at times of increased demand.

Here at West Wire Solar, our solar power packages include all the products required in the installation of a superior solar power system that will withstand even the most intense sunlight received.