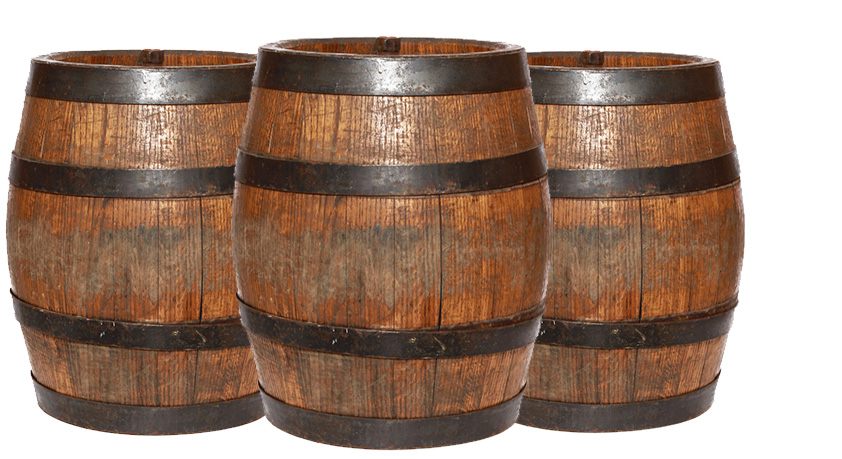 The barrel is the container where wines are traditionally aged, but what do we know about them? And the big question that everyone asks themselves: how long can they be useful?

Entering a breeding room full of wooden barrels is a sensory experience. Not only because of the particular smell of wine and wood that often floats in these places, but because of all the magic that surrounds them.

Who has not had the feeling of being in a special place and full of energy in front of the cellar of a cellar? Something magical and something hidden is happening with the wine that these deposits contain … what will it be?

Wine Barrels can easily help you give this old western feeling to any area of the house and you can rent them or buy them today. Contact us for more information.

What happens inside a barrel?

In a relaxed and calm way, wine is changing its organoleptic properties: that is, its flavour and aromas. Inside the barrel, the wine will absorb the aromas coming from the wood: the toasted, the notes of smoked, the tones of the cocoa or the vanilla.

The type of wood in the barrel is essential for the construction of great wines and the oenologist will have much to say depending on the profile of wine sought. The type of oak, the grain size and the toasting will have a considerable influence on the aromatic range, the sweetness and the contribution of tannins.

What life can a barrel have?

It will depend on what we want to use it for. The barrels generally allow to perform their function in optimal conditions for approximately 8 years. The newer the barrel, the more aromas and flavours it will bring to the wine.

For other tasks such as separation of sediments and to make racking can be suitable for about 40 years. When it comes to making high quality wines the renovation of a whole barrel park can be produced approximately every 10 years, at a rate of 10% per year. Or even in narrower time bands depending on the oenologist’s guidelines.

Sometimes it is sought that the contribution of the wood in the wine is subtle, and therefore barrels are used that previously have contained other wines.

Do the barrels provide more?

You are right! Actually, the barrel does not only serve to age the wine. It also has other purposes such as allowing the wine to be cleaned, separating possible sediments. It contributes pleasant and healthy substances (such as tannins or resveratrol), and finally allows the micro-oxygenation that fixes the anthocyanins of the wine with the tannins and stabilises the colour.

And the house barrel?

In some town houses you can still find ancient boots. Often these deposits keep great treasures inside. These barrels are religiously renewing the wine every year in the months of October and November.

In many houses there is also the so-called “bóta del racó”, a most revered container located in a place full of good energies and intentions that fills the house with virtue.

The barrel, the complexity and the magic of good wine

The barrel is that magical container that contributes in a decisive way to fix the characteristics of a good wine.

Entering a barrel room is like entering a temple or a mausoleum, it impresses. The smell, the humidity, the silence impregnates you. They make you a participant, an accomplice of the work that is being done there and a powerful sense of respect floods you. Rows of barrels, perfectly arranged and placed, keep secrets that are uncovered in a few months for the enjoyment of wine lovers.

But before entering to be part of this responsible process of aging a wine, we must talk about the secrets and great skills that surround the artisan process of making a barrel, as well as the deep knowledge of the master winemaker at the time of perform the coupage. If you want to know more about this topic, we tell you everything in the next post.

The secret of its origin

As we all know, wine has been fully linked to the Mediterranean world, its history, its culture, its parties …

Egyptians, Greeks, Phoenicians, Iberians, Romans, great peoples and civilizations fell intoxicated by wine. They made wine and worried about keeping it and transporting it. Thus, the barrel, after a long process, was consolidated as one of the most suitable containers for it.

However, this container was not invented primarily for this purpose, but for the transport of liquid or solid products. Due to its hardness and its shape, the barrels displaced the amphoras, the vessels, the skins of the animals and any other container to preserve and transport this drink.

From the time of the first Roman emperor: August, until relatively few years ago, the wine trade was done in barrels acquiring such importance that the volume of them was standardized for a better surface-volume ratio. Thus, were born the jerezanas boots and the 500 litre Porto pipes and the 225 litre Bordeaux barrel which was adopted almost officially in 1836.

The secrets of its manufacture

The quality of the wood in the barrels plays a decisive role in the aging of a red wine. The manufacture of barrels implies, first of all, having a good raw material: wood.

Formerly the barrels were made of the most abundant wood in the place of production: chestnut, pine, acacia, cherry, ash, beech … but nowadays, they are manufactured almost exclusively from oak. This was due to its abundance, its hardness and the particular characteristics of its components. These properties of oak wood made it consolidate as the most suitable for the conservation and aging of wine.

The wood that is used to make barrels is that which comes only from the trunk of the oaks of more than 35 cm in diameter without defects or branches and with the right vein. Reaching this measure means that the trees have to be at least 120 years old, so their plantation and logging have been regulated for centuries.

The stave is the constructive unit of the barrel. Each one usually has between 25 and 32 staves with a thickness that varies between 22 and 30 mm, being greater in its half than in the ends due to the central diameter.

Remember that Wine Barrels can easily help you give this old western feeling to any area of the house and you can rent them or buy them today. Contact us for more information.