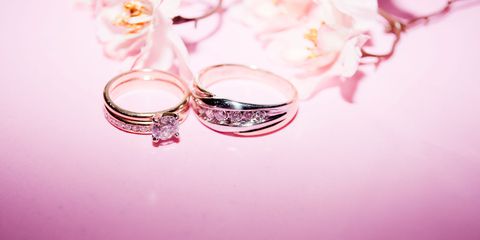 Oh, the rings … So romantic, so significant and so, but so expected! And is that a ring not only serves as an ornament but represents something. And in this post, we will talk about the romantic and loving meanings of these emblematic pieces.

Here at My Ideal Wedding we provide you with everything you need for a memorable weeding that will leave everyone surprised.

This ring is the king of surprises! After your boyfriend asks you “Do you want to marry me?” And you say yes so full of joy, he should put on your ring finger of his left hand a gold or silver ring with a precious stone, which It is usually a diamond. It is put on this finger because in the past it was believed that there is a vein in it, the vein amoris, which goes directly to the heart and thus it was given to understand that this symbol represents a formal commitment of marriage.

During the wedding there is a moment in which your boyfriend and you will exchange matrimonial rings to celebrate the wedding bond that will unite them forever. These rings are made of gold or silver because these metals symbolise the beauty and durability of marriage. Also, each one usually carries the name of the couple recorded inside to link them. After the wedding it is tradition to use them on the ring finger together with the engagement ring. It is also common to hang them from a necklace when you want to avoid damaging them during any physical activity.

There are other rings that are also given depending on the occasion, for example, when a husband gives his wife this ring, it is because he knows that his marriage symbolises a love that has no end. The ring is usually made of gold or platinum with three stones, each representing the time they have shared together: the past, the present and the future. This ring is given away after 10 years of marriage and replaces the engagement ring. It is a symbol of renewal of love, commitment and dedication for all eternity.

15 Things you did not know about the engagement ring

Most women at some point have dreamed of finding the perfect man and walking to the altar with his hand, right? Have a wedding like in fairy tales and live happily ever after. But to have that happy ending, first commitment is necessary and that’s where another thing that women dream of all their lives comes up with: the ring!

There are infinite forms, prices, sizes and materials, everything depends on the taste of each person. The interesting thing is that everyone has a story behind it. These are some curious facts that you did not know about engagement rings.

A lot of time ago, it was believed that on the third finger of the left hand there was a vein called vena amoris, the vein of love that ran directly to the heart, so the ring was originally placed on that finger.

The tradition was initiated as such by the Archduke Maximilian of Austria in 1477, when he handed Maria Burgundy a gold ring with a diamond set as a token of her love.

Although if we inquire a little more in the history, from the time of the Romans the women carried rings that were given to them by their husbands.

Although there are now many forms of rings, the commitment will always be round, due to what it means: “has no beginning or end,” as expected to be love.

Engagement rings usually carry a diamond, but why? Giving a ring is a sign of trust, commitment and eternity. Diamonds are practically indestructible, durable, invincible.

There are different cuts of diamonds, but the most popular is the circular, followed by the ‘princess cut’.

In countries like England, the United States, France, Mexico and Canada the ring is placed on the left hand, while in Germany, Russia and India it is on the right hand.

The most popular metal for making a ring was yellow gold or white gold. More recently, platinum, but due to its high price, palladium is the new option. This is also considered a precious metal, only much cheaper.

Although many may believe that February is the most common month to commit because it is the month of love and everyone is romantic at that time, it is not to propose marriage. Actually, the month in which the most committed couples is in December.

The most expensive engagement ring in the world is the De Beers Platinum, weighs 9 carats and costs around 2 million dollars.

The diamond of an average ring weighs approximately 0.37 carats.

The most recent natural diamonds are at least 900 million years old, although some scientists claim that they can create synthetic diamonds of 2.5 carats in just 4 days.

An average boyfriend spends about 3 months looking for the perfect ring. Visit approximately 4 different stores and see around 27 rings.

The protocol established that an engagement ring must cost at least three months of man’s salary, however, the most important thing is the promise of love.

43% of the bride and groom plan the moment in detail. 46% had little idea how they would do it, and 10% let the time just come, like that, without any plan.

It is assumed that in response to the engagement ring, the bride should traditionally give a watch to the groom.

Remember planning a wedding is a delicate task, with our online wedding planner you can easily achieve the wedding you have always wanted.