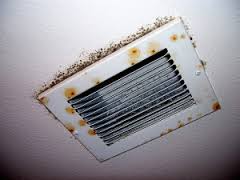 The mould belongs to the group of fungi along with mushrooms and yeasts. The curiosity of this group is that it does not belong to the animal or vegetable kingdom because the cells that form them are different from the characteristic cells of these two kingdoms. It is believed that there may be hundreds of thousands of species of mould and what building materials we can usually find in our homes are Cladosporium, Penicillium, Alternaria and Aspergillus.

In recent years there has been an increase in cases of people sensitive or allergic to mould. The reaction to mould found indoors can cause asthma episodes in asthmatics and allergy sufferers and in people considered healthy it can cause rhinitis, wheezing, respiratory disorders, cough and fever. There is also evidence that seems to indicate a relationship between exposure to internal mould and respiratory diseases in children. The construction in the last decades of intelligent buildings, which are hermetic and in which there is not enough ventilation or air renewal, seems to be the cause that some toxic moulds that have always existed now affect our health more easily. The building materials we use today can also facilitate the appearance of mould, so many of them are also treated with fungicides, substances that are highly toxic. Mould is one of the causative factors of what we know as “Sick Building Syndrome.”

Here at FireCrunch we focus on providing high quality and sustainable fire-resistant building boards for interior and exterior settings in both residential and commercial properties.

Prevent the appearance of mould

Mould reproduces through spores that may be dormant for years until the conditions necessary for germination are created and a colony is created. These conditions are: a correct level of oxygen and temperature and high humidity. A high temperature and humidity will facilitate the appearance of mould. It is not possible for us to keep the house temperature low without being cold, so the best weapon to prevent the appearance of mould is to control humidity.

If we believe that we can be at risk of mould appearing at home there is the possibility of determining the presence of toxic moulds, such as aspergillus, using simple and economical household tests without having to go through the laboratory.

A poorly ventilated room with a high degree of humidity or condensation – as in basements – or a suitable surface (clothing, wood, food, leather, plaster, etc.) That is wet for at least 24 or 48 hours It is the best place for mould to grow. Keeping the humidity below 60% is one of the main ways to hinder the proliferation of mould, since without moisture there is no mould.

Mould spores move through the air, so a very good option to eliminate mould spores and prevent mould growth is to use air purifiers with HEPA filters. HEPA filters filter particles up to 0.3 microns, so they can capture mould spores that are inside our homes. If we already have mould at home, we must take into account that mould can release toxic substances, so in this case an air purifier with two filtration phases, HEPA plus active carbon, would be recommended, so that these toxic substances are removed from the ambient.

In the same way, if we use a vacuum cleaner for household cleaning it is recommended that you have a HEPA filter so that it eliminates air spores that pass through the vacuum cleaner. We can also easily find vacuum cleaners with HEPA filters plus active carbon.

Conventional fungicides are toxic substances, so whenever possible you have to opt for substances that are safe for mould removal. To replace this type of fungicides we have the option of using non-toxic and ecological fungicides such, which is totally safe in terms of toxic substances. We can also use substances that act like bleach but do not emit toxic vapours, such as sodium percarbonate or hydrogen peroxide. Another option is to use acids that can be found in any house such as vinegar or lemon juice.

For the operation of removing mould form building materials it is convenient for the person who does it to wear non-porous gloves and mask with a particulate filter to avoid breathing and having contact with mould spores. In addition, clothes should be washed after cleaning. In the event that mould cleaning involves a large area, it is convenient to pass the vacuum cleaner with HEPA filter after cleaning or place an air purifier while doing it and keep it running for several days after to remove spores as much as possible, They will inevitably be released.

Bear in mind that our 60 60 60 board is a top line option for termite resistant building materials available at a very competitive price, here at Fire Crunch you’ll find them.