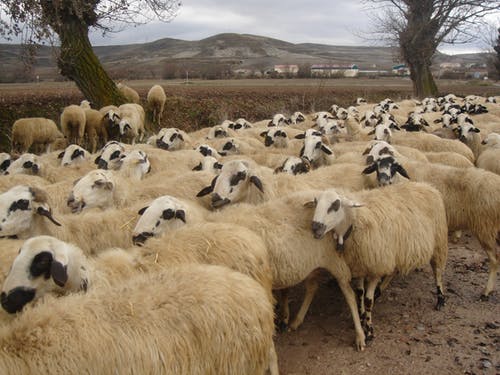 Farm animals are part of the group known as domestic animals. Domestic animals are those beings that have gone through a process of socialisation with humans. This process occurred over time between many generations creating a great coexistence these and humans.

They are mostly raised in rural areas (Farm or fields) for large numbers of animals are needed large sites. Normally farm animals are considered as cows, pigs, turkeys, chickens… Among many others.

The farmer benefits from the usefulness of the same for the production of meat, eggs, milk … Assisting him very well with the care of these animals, which is expanded in several artificial methods, otherwise, these have been used for maintenance of health and the production of products for human consumption. In this process the technology is used manipulating agents such as antimicrobials, vitamin supplements and growth hormones.

Because of this, the health of each animal has increased, with the aim of increasing production and it is the man who decides which animals they will breed in a precise time, according to their criteria and needs. Over the years, these offspring that have been selective will be modified, that is, they will have new genetic characteristics and other types of peculiarities.

In the first place, there is the chicken, used to live in a group, forming a breakdown that grows as new eggs are hatched. Hens usually lay an egg daily. The first to be born condescend a flock and in front of the rest they are considered “Dominant’’.

The hens and roosters mostly rest in the trees, this feature makes them prosperous for their care, and avoid being attacked by other animals such as foxes and raccoons

The rooster is responsible for taking care of the chickens and chickens from their breakdown, feeling some threat from a sudden noise, he sings to give warning signals either day or night.

Chickens are birds, so they have wings, and they mostly fly over short distances. These birds belong to the group of omnivores; Their type of food is based on plant matter and insects. We can also say that these constitute a great source of meat and protein for the consumption of human beings.

The care of the hens is similar to that of the cow. For example: food that is important throughout their growth, and at the same time they are supplied with amounts of vitamins and proteins. Maintain a suitable and conditioned space that provides shade and protects both chickens and chicks from the cold.

On the other hand, there are cows and bulls, if it is a newborn, it is called ‘’ Calf’, and its general reference when they are in a group is called “Livestock”.

There are different breeds of cows all with particular characteristics. One of these races is the H ’Holstein’ ’cow; This cow stands out for the large amount of milk they produce; the rest are raised for the amount of milk and its other half for meat. This species of cattle vary in colour, reaching different shades ranging from white to black, through brown and different combinations thereof.

One of its most striking features is its two horns that it carries in its head this happens for both the cow and the bull. Other of the most affectionate traits of females are their large udders for milk production. Belonging to the herbivorous class, cows have a diet based on a number of plants and thus define their great aspect of being ruminant.

The important thing about caring for cows is feeding; As stated above is the way to monitor everything they consume. The farmer has the responsibility to ensure the health of his animals. The nutrition of the cows is based on stems, leaves and seeds and at least these have been combined with protein and hay varieties. The most intense care is aimed at cows that provide more milk.

Successively the horses are found; when they are females, they are called ´´ Mare ‘and the young are called Pot ‘Foal’. These farm animals also have several breeds and some are raised for work; while the rest are usually domestic for competitions or exhibitions. In the same way they belong to the group of herbivores and feed on a large number of plants. These animals are not ruminants like cows, since they do not have four stomachs; but they can digest dried plants with the help of enzymes and bacteria in their stomach.

The horse also deserves some attention, has a space that bears the name ‘’ stable’’. The stable is a shelter that must be ordered for the care of it; either by strong winds, rain and sun. An appropriate bed must be purchased for him; Where you can rest this is to prevent it from being on a hard and uncomfortable surface.

The farmer must keep the horse clean. This means cleaning your space, washing and removing manure to avoid suffering from some diseases. You must perform activities such as washing troughs and feeder.

Finally, with this small list of farm animals we will talk about pig. The pig is one of the most intelligent and sensitive animals there is. They have a great sense of smell, as do their wild boar cousins. The colour of the pigs can vary and range from pink, white, black and brown.

Since the pig is an omnivorous animal, its diet is distinguished by being vegetable and animal matter. Other of its peculiarities is that they have a simple digestive tract, similar to that of the human being.

The farmer must safeguard the health of pigs in the spaces of farms or fields. The main thing is cleaning and disinfection; This is done to prevent possible diseases on other animals and pigs.

The point they inhabit within the farm must be cleaned three times a week; It also happens with the care of drinking fountains and feeders. Proper feeding of pigs is based on vegetables accompanied by minerals, irons and proteins.

Remember that improper treatment of the hooves in the cattle is among the major reasons that cause the premature loss of an animal. Here at Victorian Hoof Care Services we’ll be happy to assist you.