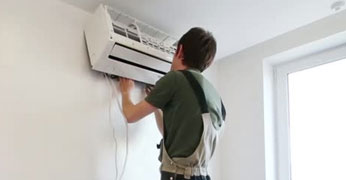 Here at PR Cooling and Heating we are well aware of how important each component of an air conditioning system is, for this reason we are going to give you a review on the functionality of each component.

The air distribution system in a room consists of the supply air outlets and the return air inlets in the conditioned spaces of the building. The movement of air in a room is affected by the openings through which air conditioning is supplied: diffusers or registers.

The number, size, shape and location of the feed air diffusers significantly affect the movement of air in the room. The appearance of air distribution in the design of air conditioning is very important, however it is often neglected. The best equipment will perform only as well as the air distribution system that supports it. An adequate design of the duct system and return apertures is also important, but will not compensate for errors made in the selection and distribution of the feed diffusers.

The return air openings are normally called return grids. The total airflow capacity of the return grills must be at least equal to the capacity of the total airflow of the feed diffusers because the returned air becomes feed air after being conditioned by the air handler. There the air returned from the conditioned space is mixed with the outside (ventilated) air, filtered and heated or cooled. The first treatment that the return air receives when it enters the air handler is an improvement of its quality by mixing it with outside air.

The process of mixing outside air with return air into an air handler and then supplying it to the spaces in the building is called mechanical ventilation and in order to have it done properly an adequate ventilation system is required. This component is key at the diluting of odours and contaminants in the conditioned spaces of the building. It also replaces the oxygen people inhale.

If there is a heating load, heat must be added to the air in order to compensate for the heat lost in the room. A heating coil inside the air handler adds that heat, raising the temperature of the feed air above the room temperature. The air typically leaves the diffusers at a temperature of 32 ° C to 60 ° C.
There are four methods for heating the air inside an air handler. One of them is to pass the air through a hot water coil that is connected to a boiler. Another one is to heat the air with an electric resistance, the most common one in this case is to use a heat pump coil. Finally, the air can be heated by a flame into the heat exchanger over which the air flows.

When there is a cooling load, air must be supplied at a lower temperature and humidity than air in the conditioned space. This allows the feed air to absorb heat and moisture while keeping space conditions acceptable. In fact, the air supplied absorbs the heat added by solar charges, transmission and infiltration from the outside as well as people, equipment and lights from the interior. It also absorbs moisture added by air infiltrations, plus moisture added from the inside by people, food and hot beverages. The air handler should remove this moisture so that air can be used to condition the space again.

To achieve this, coolant or water flows through the chiller’s coil, absorbing heat from the air that passes over the tubes and fins. Moisture is extracted from the air flowing above the handle coil because part of the water vapour in the air is transformed into liquid upon contact with cold chemicals. As the water vapour condenses, the air is dehumidified and then condensates (liquid water) is collected and drained out of the air handler.

In short, when there is a refrigeration charge in a space, cool, dry and clean air circulates through the room, where it will absorb heat and moisture. The air quantity is supplied to the room and then returned to the air handler. There it will be mixed with outside air and once ventilation is provided, then filtered and sent to the cooling coil (evaporator), which extracts heat and moisture. The condensed water descends through the drain and the cooling coil absorbs the heat. Whenever there is a cooling load in the conditioned space and cooling capacity is provided to match that load, the cycle repeats itself.

This process uses a volatile fluid to absorb heat from a place where it is not desired, raising its pressure and temperature so that heat can be rejected. Mechanical cooling is possible because of the ability of a liquid to absorb a large amount of latent heat as it changes state to constant temperature to become a vapour. In simple and everyday terms this is the boiling process, but it is called evaporation in mechanical refrigeration terminology.

A chemical compound, the refrigerant, is the fluid used in the mechanical refrigeration system to achieve this latent heat transfer. The second principle that makes mechanical cooling possible is that changing its pressure can change the boiling temperature of a liquid.

Proper functioning of each air conditioner component is needed in order to ensure the equipment is working at full potential, for this reason, timely maintenance is required.

If you are looking for reliable cooling and heating systems that are easy to purchase and install, you only have to contact us. Here at PR Cooling and Heating we do our best effort to provide with the best options in the market, at the most competitive prices.